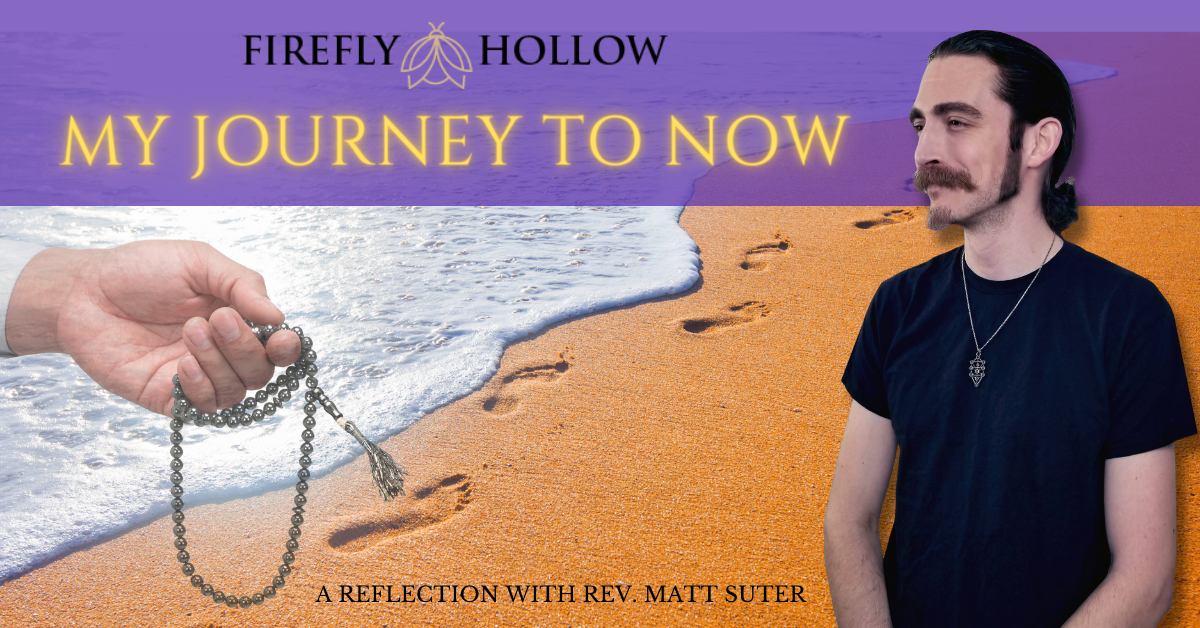 My Journey to Now: A Reflection with Rev. Matt Suter

Reflections As A Minister & Intuitive Coach

As I reflect on my past twelve years as a minister, I find myself in a space of intense gratitude for the path that has unfolded before me. From a young age, I had always felt the call to a life of service.  Whether that meant providing perspective for someone feeling lost on their journey, holding space for someone who was grieving, or sharing information about a topic that someone may have felt confused or apprehensive about. Though my journey has taken me to many different places, that calling has remained the same.

Being born and raised Roman Catholic, I felt a call was leading me to the priesthood. However, as I pursued the spiritual path, other roads opened up to me. I began feeling a pull to Eastern Philosophy and its deep inner journey that was, for me, relatively unexplored at the time. Through a beautiful synchronicity, my Uncle (also a former Catholic) had been connecting with a group of Buddhists near his home in Gettysburg and when he heard about my interest in Eastern Philosophy we sat on the front porch of my parents house and had a talk about the perspective Buddhism had to offer.

As we talked I could feel light bulbs illuminating in my mind and suddenly an inner part of myself that had remained silent until this moment seemed to shout, “Yes! This is it!”

The next time we saw each other he gave me two of the most valuable gifts I have ever received , both of which I still have to this day : A set of mala (Buddhist prayer beads) and a book called “The Power of Now” by Eckhart Tolle. As I immersed myself in meditation and introspection I found a rich, albeit underdeveloped, inner world that bore endless fruit as I explored it. I was gradually able to release a level of latent anxiety that would constantly buzz in the background of my mind, which manifested in panic attacks, insomnia and persistent intrusive thoughts.

I began to understand the inherent beauty in the rhythm of the world.

Unfettered by labels and judgements of the mind, and settled more and more into a space of present awareness that helped me to embrace life as it blossomed before me. From that moment I continued to read “The Power of Now” (along with Eckhart Tolle’s other offerings) what seems to be hundreds of times, illuminating deeper insight into the essence of surrender, openness and the power of being present as the conscious observer of our mind and experience – all of which are core concepts of my personal creed. As this awareness developed in me I studied every religion, spirituality and philosophy I could get my hands on in an effort to broaden my understanding and perspective of how we as humans seek to connect with the essence that often seems to operate beyond the limit of our sensory perception. To this day, I enjoy diving deeper into the ever expanding ancient and modern sects that make up the multifaceted tapestry of our attempts to grasp the intangible.

After my ordination as a nondenominational minister in 2010,  I began to reconnect with the diverse groups of people who I’ve had the honor of meeting along my path and found that though I had not become a man of the cloth (in the Catholic sense) I still had a beautiful opportunity to have a congregation of sorts in my everyday life. One that did not bind me to a dogma, nor place demands upon me, but rather offered me the gift to share openness, to meet people where they were, to speak the spiritual language they spoke, and to offer them perspectives they may not have explored in a space free of judgment.

Whether that was through joining two people together in marriage, coaching someone through a challenging growth in their life, shining the light of knowledge into a corner of life that seemed far too dark to explore and understand, or simply by smiling at someone to share a moment of loving presence with them. I’ve had the honor of leading groups in meditation, sharing the wisdom of the plethora of paths I’ve explored, and connecting with so many beautiful souls that renew that reverence in me that usually punctuates our departure which I express through pressed hands and a bow.

This is a gesture that embodies the Sanskrit word Namaskar (or Namaste, the more formal expression we are used to in the West) which embodies the sentiment that “The divine within me honors the divine within you”. It speaks volumes because the gesture is free from the confines of words. All at once it expresses reverence for the incarnation of divinity (God/Goddess/All That Is) standing before me, as well as acknowledging the same essence that resonates in myself. Thereby celebrating the interconnectedness of all things as a multiplicitous expression of the collective.

As I continue along my personal journey in life I am overwhelmed by the love, support and perspective that constantly surrounds me, unfettered by time or space. I thank each of you who have joined me on this path and (presently) look forward to the opportunity to continue to grow and serve this world we have been given the gift of inhabiting at this moment by shining the light of Love into the darkness of fear.

In conclusion, I would like to share a prayer that I’ve adapted from my Catholic days over the course of my life and has always been important to me, “The Prayer of St. Francis of Assisi” (My patron saint, who’s name I chose to adopt at my Confirmation)

“May I be an instrument of peace,

Where there is hatred, let me sow love,

Where there is injury, pardon,

Where there is doubt, faith,

Where there is despair, hope,

Where there is darkness, light,

And where there is sadness, joy.

May I not so much seek to be consoled, as to console,

To be understood, as to understand,

To be loved, as to love,

For it is in giving that we receive,

And by sharing the light, we shine ever brighter together on the journey of life.”

Onward and upward my friends.

Balance in all things,

Yours in Loving Presence,